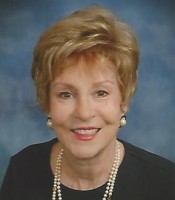 A memorial service will be held Friday, June 30, 11:00 AM at First United Methodist Church, followed by a reception.

Ann was born in Wilson, North Carolina. She and was preceded in death by her parents, James Monroe Jennings and Ruby Braswell Jennings and by her dearest companion, William Hugh Boone (Bill).

Ann is survived by her son, H. Abbitt Goodwin, Jr (Abbitt) of Raleigh and the daughters of William Hugh Boone, Betsy Moore Boone (Betsy) of Rougemont and Rebecca Alcorn Boone (Bonnie) of Durham, whom she considered her daughters.

Ann was extremely proud of and loved her family. We are deeply grateful for Anne Mercer, Judith Parker, and Curtis Hoskins for the numerous years of friendship, guidance and support.

Ann graduated from UNC Chapel Hill and earned a Master's Degree in Psychology. As recent graduate and young adult, she worked in the field of child psychology. Later she became involved in her father's farming and real estate development business. Among other projects, Ann developed the Belle Meade subdivision in Wilson, along with the Belle Meade Corporate Center and Belle Meade Commons.

Ann was very civic minded. She served on the Board of Directors at Louisburg College for many years. She also devoted time and resources to the Barton College/Wilson Symphony, the Arts Council of Wilson, the Wilson County Public Library, the Vollis Simpson Whirligig Museum and a significant number of other philanthropies.

Ann was devoted to her church, First United Methodist Church, Wilson, where she attended faithfully and served on numerous committees.

Ann had countless friends and got great pleasure from her participation in social clubs, including two book clubs and the "Giggles Group."

In recent years, one of her greatest joys was her participation in her granddaughter Jennings' equestrian activities. During the past 5 years, Ann drove to Raleigh each Wednesday to drive Jennings to horse riding lessons.

The family would like to thank the Doctors and staff at Duke Hospital and The Oaks at Whitaker Glenn-Mayview for their exceptional care.

In lieu of flowers memorials are suggested to First United Methodist Church, PO Box 1423, Wilson, NC 27894 or to a charity of your choice.

To order memorial trees or send flowers to the family in memory of Ann Jennings, please visit our flower store.