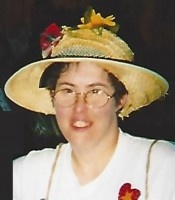 WILSON - Jeanne Ashley Fenner, 52, died peacefully on Tuesday, May 16, 2017. She was the daughter of Bill and Jeanne Fenner of Wilson.

Ashley was born in Wilson and grew up at 1003 Nash St NW. She became an original resident of Wilson Residential Services' first female group home on Gold Street in 1985. Upon graduating from Wilson County Schools in 1986, she began her employment at Diversified Opportunities, where she continued working until 2014. During her wonderful life in Wilson, Ashley participated in the many ARC activities including HOPE Singers, Noah's Friends bowling, TOBS ball games, Special Olympics, and Moose Lodge dances. She was also enrolled in Life Skill classes at Wilson Community College.

She adored her family and friends and lived life to the fullest at every opportunity. Ashley always called her daddy "Bill"; he was her best friend, motorcycle buddy, dance partner, and swim instructor. She loved to read: sports, menus, weather, TV schedules and movie credits. Other loves included singing, dancing, swimming, grocery shopping, buffets, movies with her popcorn bucket, and the Dallas Cowboys. Her heroes were "Bill" and Rocky Balboa; her motto was "eat dessert first".

The family appreciates the love and support of Joyce Starling. Special thanks of caring is extended to LIFE. Inc, Signature Healthcare of Kinston, and 3HC Hospice Services.

To order memorial trees or send flowers to the family in memory of Ashley Fenner, please visit our flower store.