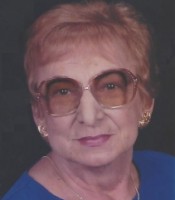 In her last days, she was happy to be at home with her Carl at her side and now in the arms of her Savior, Jesus Christ.

Born in the coal mining region of western Pennsylvania at Barnesboro, Betty had been in North Carolina long enough that she seldom thought of herself as a transplanted Yankee. She grew up in the restaurant environment and began work full time as a dishwasher when she was 14 years old to help support her mother and siblings. Her six grade education did not stop her from self-education and she earned her "PHD" from "Hard Knocks University".

She was very clever and could hold her own among most any group in society. Her hard work and perseverance gained her a world of experience and a reputation for not only being proficient as a restauranteur, but highly skilled in communicating with society in general.

Betty was an avid crossword puzzle solver which aggravated Carl somewhat because her intellect made him feel like an uneducated dummy.

Upon retirement, the couple moved to Carteret County for several years. She continued to work part time in the restaurant trade. She very much enjoyed the coastal area and made many new friends. Fishing was a pleasure so long as she was not asked to fish from a boat. While living on the coast, she was very active as a volunteer with St Andrew's Thrift Store. She soon became manager and served in that capacity for several years.

They returned to Wilson in 2005 and became active in the First United Methodist Church enjoying the fellowship of the Bradshaw Bible Class.

She is survived by her loving husband, Carl; sisters, Judy Barnes and Anna Harris (Dal) of Wilson; sisters-in-law, Alice Risko and Debbie Risko, several wonderful nieces and nephews and their adorable children.

To order memorial trees or send flowers to the family in memory of Betty Hinson, please visit our flower store.