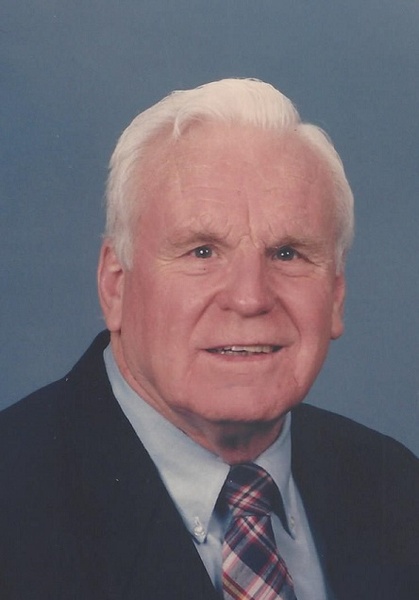 Funeral services will be held at 2pm on Thursday, December 28th at First Christian Church of Wilson 207 Tarboro Street 27893. The family will receive friends and guests at 1pm in the Education Building Parlor at the church.

Bill was born in Wilson, NC to Luna Chambers Davis and Jasper David Davis. He was a life-long member of First Christian Church of Wilson where he earned his Eagle Scout as a youth and later served as Deacon and Elder. He graduated from Charles L. Coon High School where he played football under legendary coach, Leon Brogden.

Bill served with the Army during WWII in the European Theatre with 3037 Company of the OBAM (Ordinance Based Automotive Alliance) Battalion. After the war, he was asked to play with the Seine Comets football team which entertained the troops.

Upon returning to the states, Bill attended Duke University where he followed in the footsteps of his two older brothers, Jap and Tom Davis, playing football under Wallace Wade. His athletic accolades include: Most Valuable Player in 1948, and the Most Valuable Player in the 1948 Blue Gray All-Star Game. After graduating from Duke, Bill returned to Wilson to work with his father in the family business, Davis Auto Company. He later taught Auto Mechanics at Fike High School. For 32 years, Bill officiated high school and college football, including 50 games with the Atlantic Coast Conference and several bowl games.

He is survived by his wife of 69 years, Alice Farmer Davis, whom he met in the 4th grade and was his childhood sweetheart; daughters, Virginia Davis and husband, Bruce Hollmuller, of Smyrna, GA and  Lu Ann Davis Wooten and husband, William, of Wilson; grandchildren, Brittany Wooten Fulghum and husband, Justin, of Wilson and Davis Wooten of Greenville; sister, Sara Jane Davis Etheridge of Kenly and numerous nieces, nephews, great nieces and great nephews.

He was preceded in death by his parents and siblings Jasper David Davis, Jr., George Thomas Davis and Laura Davis Moore.

In lieu of flowers, donations may be made in Bill’s honor to First Christian Church of Wilson, PO Box 2702, Wilson, NC 27894 or to the Duke Football Program (payable to Duke University) and mailed to the Iron Dukes Box 90542 Durham, NC 27708. Please include “in honor of Bill Davis” with donations.

To order memorial trees or send flowers to the family in memory of Bill Davis, please visit our flower store.