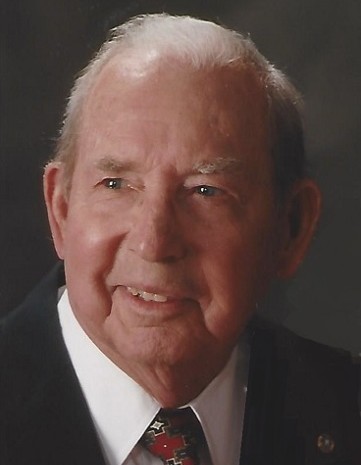 He was educated in the public schools of Stantonsburg and Wilson and received his diploma on December 7, 2001, from the State of North Carolina’s “Operation Recognition” for World War II veterans whose education was interrupted by the war.  He had served in the Army in Europe and was awarded the Battle Star for Central Europe in addition to the Victory Medal.

As a civic contribution to his community, he donated the land for a community building and swimming pool.  He was a Boy Scout leader and coached Pony League baseball.  An active Kiwanian beginning in 1947, he is a past president and was two time “Outstanding Kiwanian of the Year”.  In the Dail-Bell Post #265, American Legion, since 1945, he was commander and continued on into the Local Voiture of the 40&8.

Service to the town of Stantonsburg began in 1960 when he helped organize the Stantonsburg-Moyton Fire Department.  He became Mayor in the same year and has served on the board for two terms.  There has been a special interest in the electrical issues of small towns and he worked for over forty years to assure the best rates for the southern area of Wilson County.  He has been a continuing member of the Stantonsburg Development Corporation.

A life long member of the Stantonsburg United Methodist Church, he has held numerous leadership positions under six different pastors.  He has been a member of the Joseph Warren Masonic Lodge #92 since 1945.

Whitley was a member of the Jamestowne Society and a major concern for the organization is the location and maintenance of rural cemeteries with historical significance.  The N.C. Department of Agriculture has recognized him as a Century Farm Family Member and invited him into the Order of First Families of North Carolina.

To order memorial trees or send flowers to the family in memory of Dan Whitley, Sr., please visit our flower store.