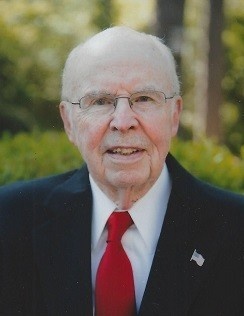 Because of the Covid pandemic, the family will not greet friends at this time, but will have A Celebration of Life in the future.

He was born in Bluefield, West Virginia on February 4, 1929 to Huitt Everett Mattox and Myrtle Agee Mattox. Bright and driven to succeed, he left Bluefield at the age of 15 to further his education at the esteemed Phillips Exeter Academy, graduating in 1947 with honors. He then attended Duke University graduating Phi Beta Kappa in 1951 and immediately started medical school at Duke University, graduating Alpha Omega Alpha in 1954. He was also a member of the Phi Delta Theta fraternity. It was while in medical school that he met his wife, Mary Lou, who was completing her education at Duke. They married on June 16th, 1954 and were married for almost 59 years. After graduating from Duke Medical School, Huitt completed an internship at Barnes Hospital in Saint Louis, Missouri, and then served in the US Army Medical Corps in Fayetteville, NC. He completed his obstetrics and gynecology residency at De Paul Hospital in Norfolk, Virginia. He and Mary Lou moved to her hometown of Wilson where they worked, raised their family and were involved in all aspects of the community for the rest of their lives.

Huitt will be remembered for his unconditional love for his family, his dedication to medicine, his respect for a strong education and his passion for all things relating to Duke University.  He practiced obstetrics and gynecology at the Carolina Clinic and later at The Women’s Center for over 33 years and delivered thousands of the babies born in Wilson during the decades he practiced medicine in Wilson.

He served as Chief of Staff at Wilson Memorial Hospital, served as a longtime board member on the HealthCare Foundation, president of the Wilson Tennis Foundation. He also worked with the Community Soup Kitchen and Meals on Wheels and was a lifelong member of First United Methodist Church, Wilson.

Huitt was particularly athletic and competitive.  He loved the game of tennis and played all over the state.  Doubles was his game and he hated to lose, but was also quick to point out when a competitor made a great shot and would remark that he hoped he could return the favor.  As he matured in life, he enjoyed playing golf where he made many lifelong friendships along the way.  He was generous, kind, honest and a true gentleman.

A Memorial Tree was planted for Dr. Huitt

To order memorial trees or send flowers to the family in memory of Dr. Huitt Mattox, please visit our flower store.