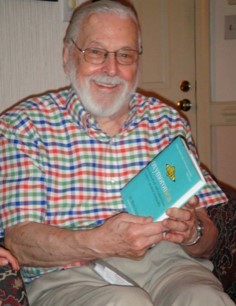 Edward Styles, 93, of Wilson, scholar and wordsmith, known for his love of literature, art, and poetry, died on December 16, 2020.

A celebration of life will be held at a later date when the family can all be together.

Born in East Chicago, Indiana, Ed was the youngest son of William and Carrie Styles. After graduating early from high school to attend Ohio State University, he enlisted in the Army Air Corps in August, 1945. Upon completion of his military service, he obtained his undergraduate degree in English at Northwestern University, pursued graduate studies at the University of Chicago, and attended art classes at the Art Institute of Chicago.

During his long and distinguished career as an editor, he worked at Encyclopedia Britannica, Encyclopedia Americana, and World Book Encyclopedia, and he was the head of the reference division at World Publishing Company. Following a project at the Joint Committee on Printing in Washington, D.C., Ed served as publications director for the American Enterprise Institute, a think tank, for 20 years until his retirement.

Ed loved to read and write, and he shared his love of ideas with others, organizing and leading Great Books discussion groups with family, friends and as a volunteer for inmates at Lorton Penitentiary in Virginia. His book collection occupied nearly every available space in his home. A loving husband, father, and grandfather, he enjoyed spending time with his family.

He was preceded in death by his brother, Robert Styles, and sister, Virginia Nicksin.

To order memorial trees or send flowers to the family in memory of Edward Styles, please visit our flower store.