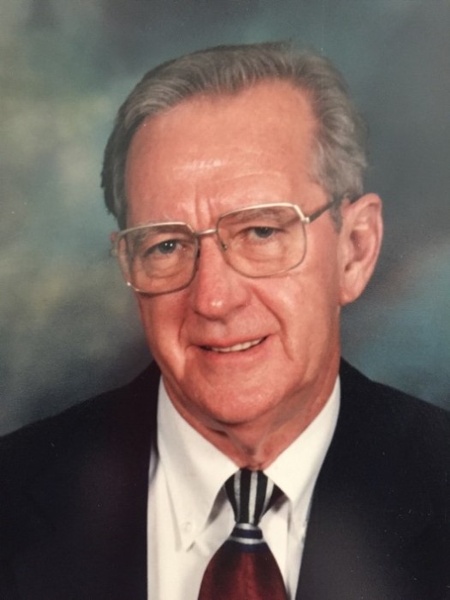 George Harris Brooks III died peacefully after a period of declining health in Clare Bridge at Brookdale Carriage Club in Charlotte, on March 4, 2019 at the age of 88.

Funeral, Monday, March 18, 11:00 AM at First United Methodist Church in Wilson, with visitation following.  All are welcome to attend and celebrate George's life.

He was preceded in death by his parents George and Mattie Louise Brooks and a sister, Laura Guin Johnson.

George was born on September 10, 1930, in Durham.  He graduated from Duke University in 1952 with a degree in Business Administration. He married Jeanette Atkins, his high school sweetheart, received his commission in the Navy and graduated from college all on the same day. After his Naval service in Bayonne, NJ, and at Oceana Air Station in VA, George, his wife and newborn daughter moved to Wilson where he began working for Southern Dairies (Sealtest) as an accountant.  In time, they welcomed two sons.  George changed careers in the 1970s and began working for the North Carolina Department of Transportation as District Accountant, where he retired in 1995.

When their youngest was in high school, they invited an exchange student, Pasi Jolma of Finland, into their home.  They have always considered him their fourth child. For many years, George and his wife were involved in the Friendship Force, making friends all over the world. George spent many years singing in the Wilson Chorale with his wife, was a member of and served in leadership roles in the Wilson Civitan Club and was a life-long member of the United Methodist Church, serving for many years as the Bradshaw Class treasurer.

George will be remembered for his generosity, love of feeding birds, hosting Christmas parties with his wife and the love and care he gave to his family.

The family would like to thank George’s caregivers in Cary and Charlotte for their care and dedication.

To order memorial trees or send flowers to the family in memory of George Brooks, please visit our flower store.