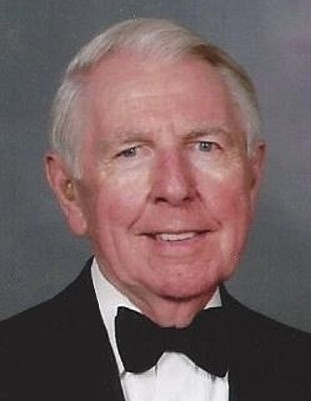 The funeral will be held on Saturday, 11:00 AM at Maplewood Cemetery.

A native of Wilson, Bud graduated from Charles L. Coon High School in 1945 and the University of North Carolina, Chapel Hill in 1951 after serving in the U.S. Navy. He was a member of the Zeta Psi Fraternity where he made many lifelong friends. He was an Eagle Scout.

Throughout his life, Bud was devoted to Barton College where he was a member of the Board of Trustees for 27 years and served as General Chairman of the Atlantic Christian College Development Council.  He also served as Chairman of the Friends Division of the Council when it was founded, and was chairman of the Bulldog Club Fundraising Drive.

Bud was committed to serving others. He served on many boards including: Hackney Brothers Body Co., First Union National Bank, Wilmed Foundation, The Wesley Shelter, Wilson Country Club, Wilson Chamber of Commerce, Wilson on the Move, and the Wilson County American Cancer Society. In addition, he was on the Board of Governors of the Tobacco Association of the United States and a 39 man advisory committee for Flue Cured and Barley Tobacco.

A lifelong member of The First Christian Church, Bud served as Deacon, Elder, and Trustee. Bud will always be remembered for his commitment to service, his infectious smile, and friendliness to everyone.

He is survived by his wife, Anna Jane Owens Ruffin; daughters, Mary Anne Ruffin of Raleigh and Jane Hackney Odum, and husband, Padgett, of Jesup, GA; son, Harvey B. Ruffin III of Boone; step-sons, Tav Gauss and wife, Kim, and Harry Gauss and wife, Liza, of Wilson; 7 grandchildren and 10 great-grandchildren.

To order memorial trees or send flowers to the family in memory of Harvey Ruffin, please visit our flower store.