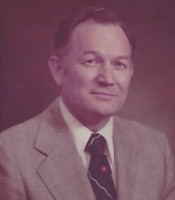 He was born in Wilson, NC, the second son of Henry Hyman Walston, Jr. and Ruth Sauls Walston. H. H. attended the Public Schools of Wilson graduating from Charles L. Coon High School. He then attended one year at Darlington School in Rome, Georgia. After graduating from Darlington, he attended Atlantic Christian College. H. H. was a natural athlete and excelled in all sports in which he participated.

H. H. was a veteran of World War II seeing action in North Africa and Italy. He was a member of the U. S. Army infantry receiving two purple hearts and the bronze star.

Following the war, he served as a sales supervisor on the Tobacco Markets in Wilson, NC and Nashville, Georgia. He also assisted his father in managing farm properties. Later he had a long career as Secretary and Treasurer of Barnes Motor & Parts Co., Inc.

H. H. married Martha Barnes Kirkland on March 22, 1947. They recently celebrated their 70th wedding anniversary with their children and families.

H. H. was a life-long and loyal member of First United Methodist Church in Wilson serving in many capacities. Upon retirement, he spent countless hours riding his steering wheel adorned bicycle, visiting friends in the hospital and nursing homes and enjoying his children and grandchildren. H. H. was loved by many and he loved everyone equally in return.

He was predeceased by his parents, brothers, Dred Stuart Walston, Hubert Cozart Walston and his sisters, Ruth Sauls Walston and Sarah Walston Peters.

He was a member of a large family and is also survived by numerous nieces and nephews.

The family is thankful for all his faithful caretakers over the last few years.

In lieu of flowers please consider contributions to First United Methodist Church, PO Box 1423, Wilson, NC 27894-1423 or the organization of your choice.


To order memorial trees or send flowers to the family in memory of H.H. Walston, III, please visit our flower store.