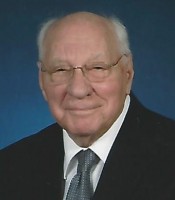 He is survived by his wife, Evelyn Williams Knowles; sons, James D. Knowles and wife, Gail, of Simpsonville, S.C. and David B. Knowles of Greenville; grandson, James Hunter Knowles and wife, Caitlin, of Atlanta, GA and granddaughter, Sarah Katherine Knowles of Charleston, S.C.; two brothers, Douglas and wife, Helen, of Wilmington and Clifton and wife, Nancy, of Palm Desert, California and many nieces and nephews.

He was predeceased by his parents Clifton James Knowles and Wrennie Floyd Knowles.

He was born in Wallace on July 7, 1926. After graduating from Clement High School in Wallace, he studied at Campbell College. In 1944 he joined the United States Army Air Corp stationed in Occupied Japan where he served as an A-26 aviation instruments instructor. He graduated from North Carolina State University in 1952 with a degree in mechanical engineering and was employed by Hackney Body Company as a refrigeration engineer for more than thirty years.

A longtime member of First Presbyterian Church he served as Deacon, Elder, Sunday school teacher and on many committees. He earned his Eagle Scout Badge at age 14 and was a passionate volunteer and mentor with the Boy Scouts. He holds the Wood Badge, an advanced course for Scout leaders, and was a recipient of the Silver Beaver for his years of service. He remained active in Scouting until his health declined.

He and Evelyn enjoyed serving as Ambassadors for the Wilson Chapter of Friendship Force, traveling internationally promoting goodwill. Since his retirement in 1988 he was a dedicated member of the First Presbyterian Handy Man Guild, volunteered with American Red Cross Blood Drive, Soup Kitchen, Habitat for Humanity, and was a mentor for students. It brought him much joy to use his talents and time to help others.

He was a faithful and loving husband to Evelyn for 67 years. He was an exemplary father and grandfather who lead by example.

In lieu of flowers, the family request contributions be made to First Presbyterian Church, Boy Scouts of America Troop 4, PO Box 3184, Wilson, N.C. 27895.

To order memorial trees or send flowers to the family in memory of James Knowles, please visit our flower store.