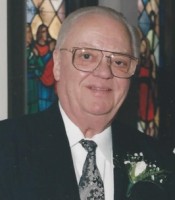 Funeral, Tuesday, 11:00 AM, Maplewood Cemetery. The family will receive friends immediately following the service and at other times at the home.

He was preceded in death by his wife, Marilyn Bricely Orr; parents, Willliam Carl and Jessie Jenkins Orr and sister, Zethia Engquist.

James, known as Jimmy to many, was raised in Asheville. He attended Biltmore High, but left school to enlist in the U.S. Navy in 1944, near the close of World War II. He was able to finish his education during his four and a half years of service and upon leaving the navy returned to Asheville to work at Biltmore Dairy for a year. He decided to again enlist and this time chose the U.S. Air Force. During his 22 years of service, he served in Korea with the 49th Fighter Bomb Wing as well as serving a year in Vietnam with the 6149 Air Base Group. In 1960, he was assigned to Kadena, Okinawa which was the "best tour of duty" he had. There he was in charge of the Rocker Club, a large club with 1500 members. In 1968, the year he later retired, he was transferred to Bergstrom Air Force Base in Austin, Texas. When President Johnson visited to base, Jimmy was very proud to cater a luncheon for Lady Bird Johnson and Linda Bird, her daughter. After retirement, Jimmy continued his career in the club business and moved to Wilson to be the General Manager for the Wilson Country Club. He was there from 1969-1980 and later at Alamance Country Club in Burlington from 1981-1989. He returned to Wilson in 1990 and ran the Elks Club for many years. Jimmy was well known in the catering business, especially for his delicious roast beef. When Wilson received the honor of All American City in 2003, he was responsible for the meal to feed 1,000 people at the Recreation Center. Jimmy loved his wife of 63 years Marilyn, his three children, his grandchildren, playing golf, and watching Tar Heels.

A special thank you to Community Hospice for the loving care shown to him during this time in hospice. An enormous thank you also goes to Janet and Terri, his caregivers, who treated him as if he were family.

To order memorial trees or send flowers to the family in memory of James Orr, please visit our flower store.