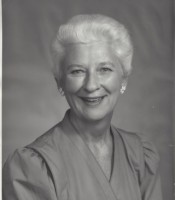 Funeral, Saturday, April 2nd, 11 AM, First Baptist Church, followed by a time of visiting and sharing in the fellowship hall.

Jennie is the widow of Dr. Lewis Wells Lee. Also preceded in death by her parents Henry Clay and Callie Perry Newbold and brothers H.P and Clay Newbold of Elizabeth City, NC.

Jennie was born in Sanford, North Carolina and moved with her family to Elizabeth City where they made their home. She speaks fondly of childhood memories and speaks quietly about how her father, who was a banker, lost his job in the depression and had to work so very hard loading train cars when she was a young girl. She was a great student in school and never understood why people didn't follow the rules. She loved school and loved music and soon combined the 2 when she went off to the big city of Raleigh to attend Meredith College. She graduated from Meredith College with a degree in music. She served as a church secretary at First Baptist in Raleigh before moving to Wilson with her husband Lewis. They joined the First Baptist Church in the 1950s and served the Lord with all of their heart.

Jennie loved Wilson, North Carolina! She referred to it as "God's country". She loved the change of seasons and the snowflakes when they made their rare appearance. She wanted to know about you and your family and she liked to know all the happenings in Wilson and got involved in as much as she possibly could. She said many time, "I've got to quit doing so much" and then the very next day she would be telling you about the newest venture she was involved in! She was a great organizer and had a way of getting people to say yes to her requests!

She was actively involved with the WMU (Women's Missionary Union) at First Baptist and spent 14 years as the director. She was recognized by the WMU for her mission work through First Baptist Church with the WMU service award in 1987 & 1988.

As a lifelong choir member she praised the lord with her beautiful voice joined in harmony with her great friends in the choir. She helped keep everybody organized down to making sure the robes were hanging in the closets with the correct color stole ready to go on Sunday morning. She sang in many weddings and directed many more. When she talked about retiring from the choir, she said she wouldn't know where to sit in church if she wasn't in the choir loft!

Jennie would tell you she hadn't had any "paying jobs" since she came to Wilson except working for Belk's, which she did for 30 years. She coordinated all the Belk fashion shows throughout the years. She loved getting friends to come model Belk's clothes in fashion shows that were held in many locations for many events. Jennie loved fashionable clothes and being "put together" head to toe. She was known for that. People recognized her wherever she went and loved her style. I am sure that over the years, 90% of her clothes came from Belk and she wore them well and told everyone where she shopped! She was perfect for coordinating fashion shows and was a wonderful ambassador for Belk's throughout her career!

Her mission to feed and serve people who are unable to care for themselves included service to Meals-On-Wheels. Mother delivered meals to many shut-in and elderly people in the community. One of her favorite partners on these deliveries was Dr. Edward Thorne. They gave comfort and nourishment to many citizens of Wilson and for some clients, were the only visitors they had to check on their well-being.

Jennie loved the Woman's Club. She started in the Junior Woman's Club and quickly became a leader members could rely on to not only plan events but carry out that plan with great organizational skills and boundless energy. She went on to serve in many leadership roles in the Woman's club as well. She handled the rental of the Woman's Club for many years. She enjoyed meeting the clients who rented the club as well as taking care of the club that is the place for many happy memories for the clients that rent the club for their special event.

She also took the Wilson Homes Tour under her wing. She loved going around Wilson and finding the right houses for the tour. She was well respected and well known and people loved getting involved in the tour because they knew with Jennie at the helm it would be successful!

Jennie has been involved in many organizations including the American Home Society, the Roundtable and the Book Club. She has received recognitions over the years for her volunteerism and her service to this community, but she never liked to focus on the recognition, but on the accomplishments made by each group to better the world... and that starts one person, one day, one opportunity at a time. She never underestimated the outstanding things that occur when people bring their skills together to make things happen... and she knew early on that she had the organizational skills, energy and desire to make sure it was done right.

Jennie Lee was a shining example of a cheerful giver. She touched so many lives, over so many years and really never understood what all the fuss was about!! Serving is what she was called to do and she has done it with grace and style and we have all been blessed to have known her.

2 Corinthians 9:6 But this I say, He which soweth sparingly shall reap also sparingly; and he which soweth bountifully shall reap also bountifully. Every man according as he purposeth in his heart, so let him give; not grudgingly, or of necessity: for God loveth a cheerful giver. 8And God is able to make all grace abound toward you; that ye, always having all sufficiency in all things, may abound to every good work:

Matthew 25:21 His lord said unto him, Well done, thou good and faithful servant: thou hast been faithful over a few things, I will make thee ruler over many things: enter thou into the joy of thy lord.

To order memorial trees or send flowers to the family in memory of Jennie Lee, please visit our flower store.