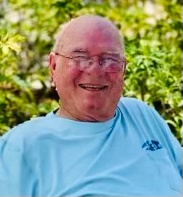 A celebration of his life will be held at Saratoga Christian Church at 6:00 PM, Wednesday, July 14, with visitation to follow.  Casual attire is preferred.

Born on August 25, 1940 to Henry Wallace Ellis and Ethel Lee Craft Ellis, Jerry attended Saratoga High where he played basketball and baseball and met his high school sweetheart, Delance Harrell Ellis, whom he married on September 18, 1961.

Jerry served in the Marine Corps from 1958-1964 and was stationed at Parris Island, SC; Camp Lejeune, NC; Twentynine Palms, CA; Okinawa, Japan; and Camp Pendleton, CA. Following his discharge from the service, he returned to Saratoga where he was self-employed as a farmer, worked with R. J. Reynolds Tobacco Company, Southern Nitrogen Company (Kaiser Chemicals), the City of Wilson, and Consolidated Diesel Company, from which he retired in 2002 with 20 years of service as an electrical technician.

While he enjoyed his work, his favorite role by far was that of Papa. He was happiest when the whole family was together, on vacation or at home in Saratoga. He was an avid gardener and spent as much time in the yard or his greenhouse as he did inside watching westerns or sci-fi movies. He also loved reading and traveling with his wife.

In lieu of flowers, memorials may be made to Saratoga Christian Church, PO Box 395, Saratoga, NC 27873.

A Memorial Tree was planted for Jerry

To order memorial trees or send flowers to the family in memory of Jerry Ellis, please visit our flower store.