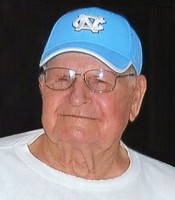 James Harold DeRatt, Sr., was born on October 9, 1924, to the late Ambrose Eugene DeRatt and Estelle Wallace DeRatt. He was proud to have first served in the Merchant Marines and then the U. S. Navy during World War II. Though he was born in Rossville, GA, he called Stantonsburg home. He began his teaching career in 1950 at Stantonsburg School and finished his teaching career at Beddingfield High School. He married his Emily Katherine Shaw of Parkton, NC, on June 18, 1952. They met in Wilson, NC, while he was attending Atlantic Christian College.

During his life, he was known by several monikers: Mr. DeRatt, Coach, Jim (by close friends) Uncle Bud (by many nieces and nephews), Sug (that was Em’s), Daddy, and Grand-D (by his seven grandchildren). He taught in the Wilson County Public School System for 38 years. During his career, he taught several different subjects, but loved history above all. He also coached football, basketball, and/or baseball at Stantonsburg School and later at Saratoga Central High School. Just before his children were old enough to attend high school, he gave up coaching and regular classroom teaching in favor of becoming the resident Driver’s Education instructor.

Jim loved to fish. Being a ‘founding member’ of the Sand Pit was a source of pride to him. He and his best friend, Don Webb spent many happy hours together fishing, ‘chewing the fat,’ cooking, eating, gardening, and telling lies.

He was proud to claim that he provided under-the-wheel training for each of his grandchildren on trails around that sand pit at some time prior to them acquiring their driver’s licenses. Spending time with his grandchildren at the sandpit, teaching them to fish, sharing and loving them became more important to him with each passing year.

He enjoyed all manner of sports. After retiring from teaching, he continued to attend sporting events whether family was participating or not, but nothing could compare to the joy he experienced from watching his children and grandchildren participate in baseball, football, soccer, basketball, softball, or volleyball.

February 4, 2000, after 49 years of marriage, he lost the love of his life to pulmonary fibrosis. He never totally recovered from the loss of his beloved “Em”, but continued to live in Stantonsburg in the home he and she had shared. In June of 2010, Jim suffered a debilitating stroke. After a lengthy rehab, his physical recovery was incomplete, but his children brought him back home as soon as he was well enough. There he continued to live a loving, fulfilled life with his children, grandchildren, and friends. In 2014, he accepted Jesus Christ as his Lord and Savior and has now been reunited with the earthly love of his life.

In lieu of flowers, the family asks that memorial donations be directed to a charity of their choice.


To order memorial trees or send flowers to the family in memory of Jim DeRatt, please visit our flower store.