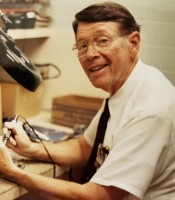 Funeral, Saturday, June 3, 4:00 PM, Winstead United Methodist Church, followed by a time of visiting and sharing. The burial will be for and at the convenience of the family.

John "Jack" Townsend was born in Wilson, son of the late Robert E. and Matilda T. Townsend. He was preceded in death by wife, Rebecca Barnes Townsend in March; brother, Robert E. Townsend of Garden City, Kansas; sister, Matilda T. Ruffin of Florida. John was a veteran of WWII, serving aboard the USS Prairie, AD 15, and after discharge worked in broadcasting as an announcer, engineer and program director. Later, he established a business of two-way radio service for the City of Wilson and various businesses in Wilson County. After retiring, he worked ten more years as an electronics technician for Wilson Memorial Hospital.

Jack was a jazz pianist, amateur radio operator and composer of music and poetry. He was the author of four books of Christian Meditations. He spent forty years as a church musician for various churches. John always credited his achievements to the Lord Jesus Christ, who inspired his walk in life.

To order memorial trees or send flowers to the family in memory of John Townsend, please visit our flower store.