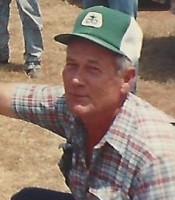 He was preceded in death by his wife, Martha Speight Watson who died 1995.

To order memorial trees or send flowers to the family in memory of John Watson, please visit our flower store.