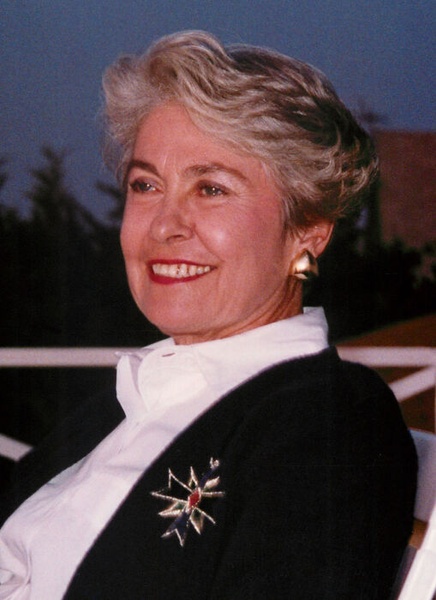 A graveside service will be Friday, 11:00 AM, at Maplewood Cemetery.

Katherine Kinsey Whitford was born in a house on Craven Street in New Bern, NC on March 10, 1933 to Annie Kinsey Cook Whitford and John David Whitford. She described her childhood as wonderful, despite growing up during the Great Depression. Her father left when she was three and from then on she was raised by a single mom and an entire community.

She grew up in a neighborhood surrounded by close friends and family. Her two grandmothers both lived close by. During the war, her mother often took in boarders including Marines from the base at nearby Cherry Point, which was under construction.  One Marine stationed at Cherry Point was Dick Pope, Jr. of Cypress Gardens fame who taught her to water ski on the Trent River. Katherine was in one of the “shows” put on by Pope for the locals.

She learned to drive at the age of 12 in a surplus Jeep on a dirt road. She was tough enough to hold her own with all the boys in the neighborhood. Katherine went to summer camp several summers at Camp Montreat in Black Mountain. She said she learned to make her bed “military-style” so you could bounce a quarter on the top sheet. She was particular about bed-making for the rest of her life.

In the summer of 1950, Katherine met the first great love of her life at the Dunes Club in Atlantic Beach. She saw a boy practicing dancing “the Charleston” with a chair. She decided he had the “best looking legs I had ever seen on a man”. Jimmy Barnes was from Wilson and went to Episcopal High School in Alexandria, VA. She took the train up to the school to go to dances with Jimmy during their senior year.

She attended Saint Mary’s College in Raleigh after high school. In the summer of 1952, she made her debut in Raleigh. After graduating from college, she returned to New Bern to work at Tryon Palace during the restoration.

Katherine and Jimmy married during Jimmy’s senior year at UNC and moved to Chapel Hill. They moved to Wilson after Jimmy’s graduation and started a family.  After five children, a tragic accident in 1967 took Jimmy and left Katherine to raise them on her own. She was only 34.

Katherine met and married Joe Chesson in 1972. Joe had recently lost his wife and had two children of his own. They were married for 20 wonderful years. During this time, she was a dedicated mother, but found time to perform with the Barbara Berry Singers and practiced her love of music and singing. She was very involved with Saint Timothy’s Episcopal Church in Wilson, too, as a member of the Altar Guild. Pop and KC loved their big extended family and reveled in graduations, weddings and having grandchildren. They spent a lot of time at Katherine’s “happiest place”, KC’s Castle in Topsail Beach.

Her mother died in 1990 followed by Joe in 1992. But at a class reunion in New Bern, she reconnected with a childhood acquaintance, Bryan Scott, who had recently lost his wife. They had a whirlwind romance and married, and lived in New Bern during the 90’s. Bryan and Katherine enjoyed traveling and spending time on the river near Oriental, NC.

Sadly, Bryan lost a battle with cancer in the summer of 2001. Katherine moved back to Wilson and enjoyed her time at her church and among her many friends.

She moved to Spring Arbor in Wilson, where she spent the last several years. She had a good experience there with a caring staff who supported her as she fought against dementia.

She went home to be with the Lord and reunite with her mother and her loves on Tuesday, May 11, 2021. The family thanks the kind and caring staff at Wilson Medical Center for all they did to ease her suffering.

A Memorial Tree was planted for Katherine

To order memorial trees or send flowers to the family in memory of Katherine Scott, please visit our flower store.