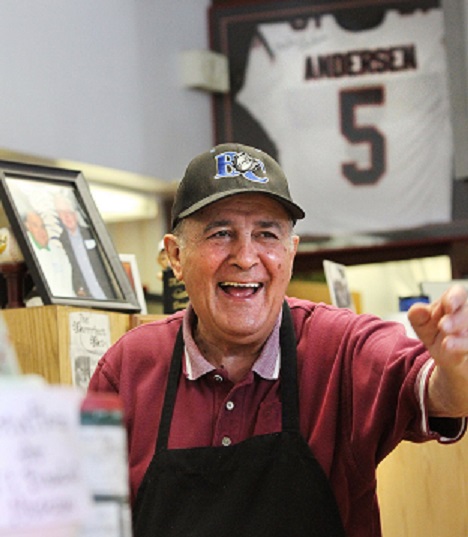 The funeral will be held Saturday at 4:00 pm at St. Timothy’s Episcopal Church, 202 Goldsboro Street E, Wilson.  A visitation and celebration of Lee’s life will be held following the service at The Elks Club, 2814 Fieldstream Dr. N, Wilson.

Lee was born in Wilson, to the late Socrates and Hariklia Gliarmis and was blessed to have two church homes, St. Timothy’s Episcopal Church in Wilson and Holy Trinity Greek Orthodox Church in Raleigh.  In 1957, he married the love of his life, Janie Athanas, and they enjoyed 62 beautiful years together.

“Lee Gliarmis is a hero to the Wilson community and to the entire state of North Carolina for all the work he has done in sports and recreation.”  CEO Lynwood Roberson spoke those words in 2013 when the Frederick E. Turnage Chapter of the American Red Cross honored Gliarmis. Countless others have expressed similar sentiments when recognizing Gliarmis for all he has done to elevate athletics as well as humanitarian efforts in Wilson County and beyond. His induction into the N.C. Sports Hall of Fame in 2014 perhaps comes closer to acknowledging the breadth and depth of his contributions than any honor he has ever received.

Gliarmis was the owner and operator of Dick’s Hot Dog Stand, established by his father in 1921 and best described as “Wilson’s hub of sports activity.” In his youth, Gliarmis spent many hours working in the restaurant alongside his brother, Staff Sergeant Richard Gliarmis, who died in the Battle of the Bulge. But Lee’s dream, as a three-sport athlete at UNC Chapel Hill, was to pursue a career in coaching. Then his father became ill, and Lee Gliarmis, as a UNC graduate, came home in 1950 to run the family restaurant.  In lieu of a paid coaching career, Lee spent countless hours during his afternoon breaks with his family and coaching multiple youth league sports.  He will also be sorely missed by the assisted living community as he was a frequent visitor on his days off.

Over many decades, Gliarmis has contributed significantly to any number of success stories and worthy causes, especially in instances where the needs of young people were served. He helped establish the athletics booster club at Barton College, where he is an honorary alumnus. He has been a constant pillar of support for the athletics program at Fike High School, where he is a member of its hall of fame.

In particular, Gliarmis has been a tireless supporter of baseball. He helped establish the Wilson Hot Stove League, along with his close friend Gilbert Ferrell, to support youth and interscholastic baseball programs, and he led the effort to renovate Fleming Stadium. Once on the verge of demolition, Fleming Stadium now serves as home to the North Carolina Baseball Museum.  Lee was awarded The Order of The Longleaf Pine and was proud to be a lifelong Shriner and member of the Moose.

Kindness and honesty always guided every day of his life.  This quote best exemplifies the life of Lee Gliarmis…”Be kind whenever possible, it is always possible.”

Lee was preceded in death by his parents and his brother, Richard, and his loving wife, Janie on February 6 of this year.

He is survived by his children Ricki (Ray) Barger, Socrates (Karen) Gliarmis, Chrisanne Gliarmis and Lee J. (Ginger) Gliarmis; and his grandchildren, Frankie (Brittany) and Christopher Barger, Nicholas and Zachary Gliarmis and John, Walker and Sallie Gliarmis and his numerous cousins, nieces and nephews.

To order memorial trees or send flowers to the family in memory of Lee Gliarmis, please visit our flower store.