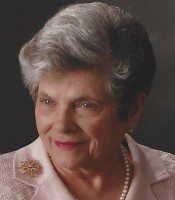 She was born on March 17, 1925, in Alamance County. She was preceded in death by her parents, Bernhardt A. and Helen Margaret Hill Waldenmaier, a sister, Elizabeth Hansen, brother, Bernhardt Waldenmaier and two nephews.

Her education began in Fayetteville public schools and she continued on to Woman's College in Greensboro, Class of 1945, for her BA degree. Teaching was her profession and she taught primary education in Sanford, Stantonsburg, Eureka and the Goldsboro Christian School.

On April 6, 1947, she married Daniel Whitley of Stantonsburg in St. Paul's Episcopal Church in Beaufort. She enjoyed a full life as a mother, teacher, civic and community participant.

In Stantonsburg, she was an organizing member of the original Stantonsburg Public Library Board, served several years as a Cub Scout Den mother. With Dan, she helped establish a public play ground in town by obtaining a long term lease with grant funding. For several years she was on the Wilson County Committee for the Kathryn N. Reynolds Scholarship Committee for UNC-G. She was honored to serve as co-chairman for Stantonsburg during the 130th Celebration of Wilson County.

As Dan was a veteran of World War II, she became a member and past president of the Auxiliary of American Legion Dail-Bell Post #245. She served as Worthy Matron of the former Darden Chapter of the Order of the Eastern Star, Chapter #265.

To order memorial trees or send flowers to the family in memory of Marguerite Whitley, please visit our flower store.