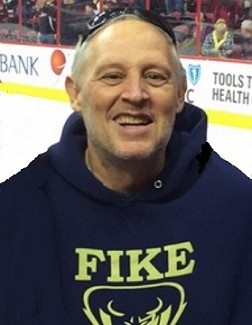 A tribute will be held Friday, Jan. 5, 6:30 pm at Wilson Memorial Service.

Mike was born in Maine to Donald and Catherine Pastors Wickham.

He graduated from Rome Free Academy in Rome, NY and Cortland State in Cortland, NY. He moved to NC in the early 80s to be near family and friends. This is where he began his career in the furniture industry. He began at Heilig Meyers and later became regional manager for Rent America. For the last 17 years he has been in management at Furniture Liquidators.

Mike was an avid sportsman his entire life. He played many sports but his true passion was wrestling and was on the varsity team in high school. Later in life Mike continued his wrestling passion as head wrestling coach at North Johnston High School from 2006 to 2011.  In 2012 he became head wrestling coach at Fike High School in Wilson where he made many historical accomplishments. He led the team to several first time ever championship tournaments and Mike received conference coach of the year award for the 2016 -2017 season. Mike was a member of the NC Wrestling Coaches Association.

To order memorial trees or send flowers to the family in memory of Mike Wickham, please visit our flower store.