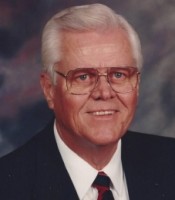 The funeral service will be Tuesday, 1:00 PM, at First United Methodist Church, Wilson, immediately followed by visitation at the church. Burial will take place in the Eureka Cemetery, Eureka at 3:30 PM.

Born in Wayne County in 1933, Richard was the son of Nathan Julius and Ruby Woodle Darden.

Richard was an honor graduate in the 1951 class of Eureka High School. He grew up on the family farm in Faro, continued farming after graduation; operated Darden-Scott General Merchandise during which time he began his affiliation with Royster Fertilizer Company in the late 1960's; retiring with the company in 1994 as a Senior Vice-President. He served as President and was a lifetime member of the North Carolina Plant Food Association. He was appointed to the Board of Directors of BB&T in Fremont, retiring as Chairman.

Richard was a person of service to his church, community and his country. He devoted many hours to both Yelverton and First United Methodist Churches, Eureka Ruritan Club, C.B. Aycock Booster Club, Eureka Town Board, and served in the US Army Infantry from 1956-1958.

To order memorial trees or send flowers to the family in memory of Richard Darden, Sr, please visit our flower store.