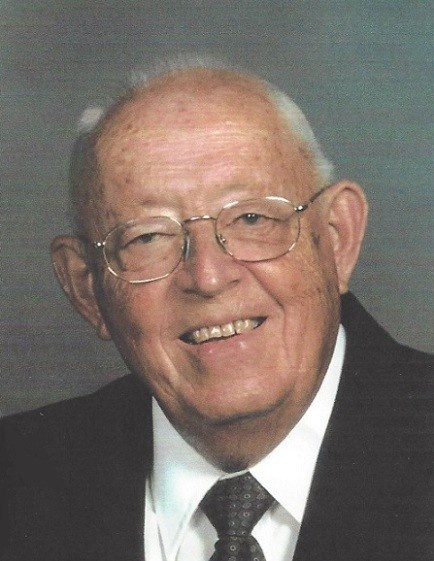 WILSON - Royce Johnson Crawley, 93, passed away peacefully on January 14, 2018, surrounded by loving family. He was born August 22, 1924 in Littleton, NC, to Roger Johnson and Margaret Kinlaw Crawley, and had lived in Wilson since the age of three.

The Funeral Service will be Saturday, January 20th at 2:00 PM at Wilson Memorial Service.  Royce’s family and friends are invited for visitation one hour prior.  He will be laid to eternal rest at Evergreen Memorial Park beside his loving wife, Mary Frances W. Crawley, who passed away in 2011.

He was a lifelong member of the First Baptist Church of Wilson, a World War II Army Veteran, and enjoyed a distinguished career as an accountant for Brown & Williamson Tobacco Co.  In his retirement, he worked happily alongside his wife, catering for many friends and families. He took great pride in caring for his home and his loved ones as the patriarchal handyman with a smile that lit up the day. He enjoyed singing with his beautiful tenor voice in the First Baptist Church choir and spending time with all of his family whom he loved dearly.  He was a gentle, kind, selfless, loving and devoted son, husband, father, brother, grandfather, great-grandfather, and friend. His shining soul, wonderful sense of humor and youthful playfulness made him truly one of a kind, and he will be missed by all those whose lives he touched.

To order memorial trees or send flowers to the family in memory of Royce Crawley, please visit our flower store.