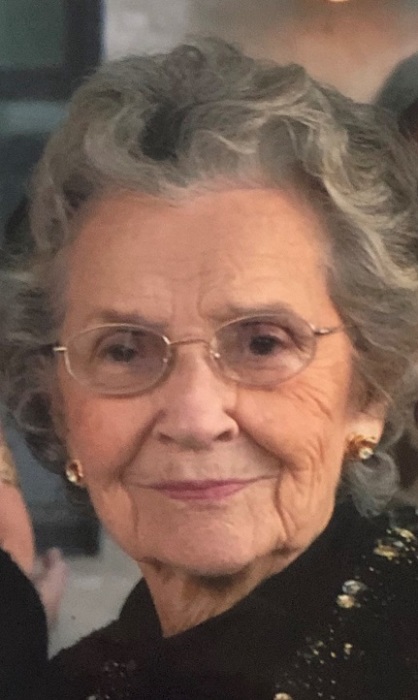 WILSON - Ruthmary (Ruth) Pope died peacefully at her home on January 1, 2019, surrounded by her family.

A Memorial Service will be held at 3:00 p.m. on Sunday, January 6, 2019 at First Presbyterian Church of Wilson, with visitation to follow.

She was born on September 15, 1921 in Jackson Springs, NC, to Lucille Alice Damon and William Clyde McColl and later moved with her parents and three older brothers to Wadesboro, Scots, and Linden, NC.  She attended Flora MacDonald College, Case Western Reserve University, and received her degree in home economics from Catawba College. After teaching school in Mint Hill, NC, Ruthmary worked as a home agricultural extension services agent in Mecklenburg County. During World War II, she joined the American Red Cross and was assigned to the Army Hospital in Memphis, TN, where she met a young Naval physician from Enfield, Robert Clyde Pope. Bob and Ruthmary fell in love and were married, moving later to Durham, for Bob’s pediatric residency. They made their home in Wilson, where they raised their family and enjoyed 58 years of marriage until Bob’s death May 28, 2006.

Ruthmary lived a generous life, grounded in her love of hard work in the service of others. She was a community and church volunteer extraordinaire. Her creations in thread and fabric graced the lives of countless recipients of clothing, baby blankets, home décor, and prosthetics for breast cancer survivors. She shared her culinary gifts in times of joy and need. Her wit was legendary, and her sayings known as, “RooRoo-isms,” elicited eruptions of laughter whenever heard. Her giving spirit propelled her to share her home and beach cottage with numerous friends and family members.  She loved gardening and her artistic floral arranging brought joy to others. Her tireless service to her community benefited the Salvation Army, PTA, community concerts, garden club, book club, Wilson Medical Auxiliary, American Cancer Society’s Reach for Recovery, and Crisis Center. Ruthmary was a dedicated member of First Presbyterian Church of Wilson, where she was active in her circle and Women of the Church and was recognized as a leader by congregational election as both deacon and elder.

The family asks that in lieu of flowers, memorial contributions be made to the First Presbyterian Church of Wilson’s Choir Reserve Fund (firstpreswilson.com), Children’s Hunger Elimination of Wilson County (thechewinc.com), or Wake Forest School of Medicine’s Center for Experiential and Applied Learning, Winston-Salem, NC (school.wakehealth.edu).

To order memorial trees or send flowers to the family in memory of Ruth Pope, please visit our flower store.