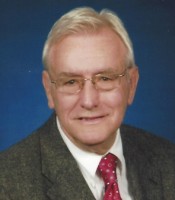 Sam served in the U.S. Army then attended Hardbarger Business College in Raleigh. After graduating he worked as an accountant for Royster for 40 years. Sam attended Winstead UMC, he loved music of all kinds and sang in a number of church choirs over the years as well as the Wilson Chorale. Sam began dancing at an early age and loved it. He danced until the last two years of his life.

He is survived by his step-son, Ray Ballenger (Ann) of High Point; three step-grandchildren; six step-great-grandchildren; many nieces and nephews and special friend, Mae Landing Eatmon of Wilson.

Flowers are welcome or contributions may be made to Winstead United Methodist Church, Choir Fund, 1407 Tarboro St SW, Wilson, NC 27893.

To order memorial trees or send flowers to the family in memory of Sam Barnes, please visit our flower store.