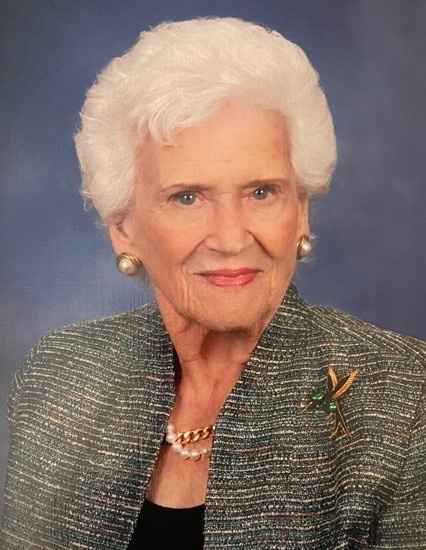 Sara Hunsucker Herman passed away on March 16, 2021 in Raleigh.

Services and burial will be Saturday, March 20th at noon at St. Matthew’s Reformed Church in Maiden, NC.

Born on October 30, 1926 in Newton, NC, she was the daughter of George Edgar Hunsucker and Ethel Josey Hunsucker of Maiden, NC.  Sara attended Maiden High School, Appalachian State University and graduated from Duke University with a BS in Medical Technology. She married the late Bandy A. Herman and they lived in Greenville before moving to Wilson in 1951, where they raised their three children. The Herman household on Albert Avenue in Wilson was a popular gathering place for family and friends. They were married for 63 wonderful years until his death in 2012.  Sara remained in Wilson until 2019 when she moved to the Cardinal at North Hills in Raleigh to be closer to family. She was an active member of the Wilson Woman’s Club and the Bradshaw class at the First United Methodist Church in Wilson. Throughout her life, Sara had a passion for painting, a gift which is now shared by her two daughters. She was an avid gardener and loved to cook delicious dishes for family and friends. Sara was a gracious loving wife, mother, grandmother, a friend to many and loved by all. Sara enjoyed her Bible Study friends throughout her life and had an abiding faith in the Lord Jesus.

In addition to her husband, she was predeceased by her brother George Hunsucker Jr.

A Memorial Tree was planted for Sara

To order memorial trees or send flowers to the family in memory of Sara Herman, please visit our flower store.